And so, 2004 and the first year of YAD comes to a close. Two hundred and thirty six columns. Even knowing how many days there are in a year, two hundred and thirty six seems like a lot. Yet my work has just begun.
Many moons ago, I had the idea of the Map Of The Fifty Hates, a US map showing just where my wrath has fallen. So, to celebrate YAD's first year, I went ahead and took a whack at it. I make no assertions as to its absolute accuracy, my methods were both painstaking and crude. But they'll give you a pretty good idea. I was harshest on my home state, but, you know. I live here. I have to deal with its stupidity first-hand. Plus, our governor is a fuckhead, and so is at least one of our senators.
So here you are, the annotated Map of the Fifty Hates. 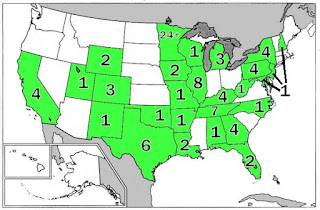